Back in Zermatt, I start the morning with one of the cans of Mountain Dew I brought back with me from Lucerne. This made-in-Germany Dew is not quite the same as what I’m used to. The ingredient list looks different, and not just because it’s in German. Sugar and not high fructose corn syrup. No Yellow 5. That last one is very noticeable as I pour the contents of the can into a glass, and it looks more the color of brandy, and less the color of radioactive urine. Though very similar in taste, I guess I’m particular, and I’d rank this around the same as most other sodas I might enjoy – Dr Pepper or Cherry Coke – but not the precise acquired taste I have for Mtn Dew. END_OF_DOCUMENT_TOKEN_TO_BE_REPLACED

The day before, when walking past the beautiful Jesuit church, the doors were locked, but I saw they had a 7am daily mass, so this morning I wake up with the sunrise intent on catching the morning mass and having a look around the church. Sadly, when I got there, a moment before 7, the doors were still locked. After a bit of exploration I deduce there must be some back entrance the faithful use, but I am unable to find it before it is too late to be proper to walk in. I guess I’ll give myself more time when I next try to find my way into a seemingly locked building. END_OF_DOCUMENT_TOKEN_TO_BE_REPLACED

More than two days in a row skiing is too much for me, so I decided to go to Lucerne for a couple days. This was the one place that I seemed to have been recommended the most when talking about my trip, despite having never heard of it before. I got up and caught an early train to Lucerne, and when I got there I was starving, so went in to the nearest shop that looked inexpensive, and a pizza was consumed. 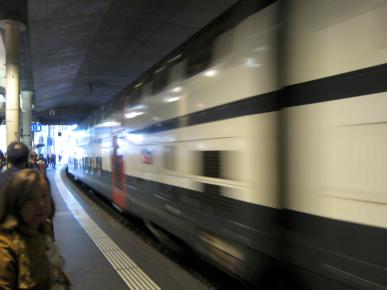 END_OF_DOCUMENT_TOKEN_TO_BE_REPLACED

Today my legs are feeling a bit burnt out from all of the powder skiing yesterday, and the snow conditions have reverted to pretty mediocre – everything melted and froze over night, so it’s ice in the morning and slush in the afternoon – so only a little skiing today, with frequent photo stops, and then some exploring of the other tourist sites available up on the glacier. 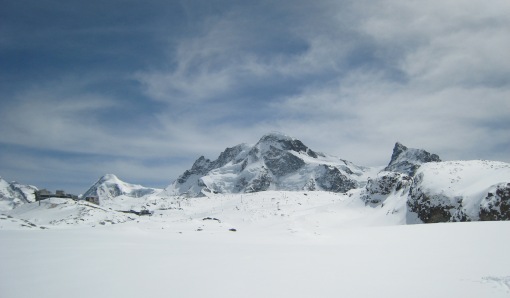 END_OF_DOCUMENT_TOKEN_TO_BE_REPLACED

I walk with my skis to the base of the gondola, a little far away, but not a bad walk. As I walk I get my first glimpse of the Matterhorn, dominating the horizon from below, though was not as impressive up closer, as is often the case with large things. Lift tickets are expensive here, even more expensive than the recent price increases at Tahoe! As I ride the gondola up, I get nice views of Zermatt, covered in snow. END_OF_DOCUMENT_TOKEN_TO_BE_REPLACED

My first long distance train travel in Europe! First of many, I’m sure. 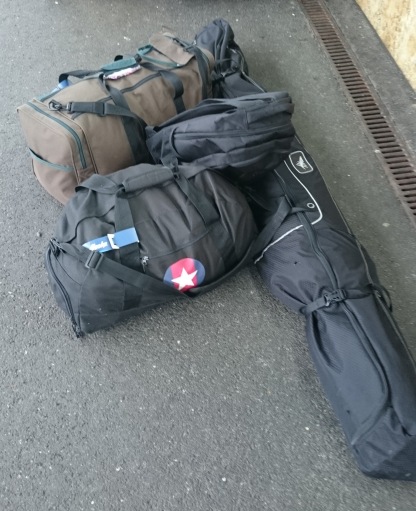 I have too much stuff.

Luckily half of this stuff (my skis, boots, and winter gear) is only going as far as Zermatt, but it’s slightly more than I can carry reasonably, so I end up exhausted after the rather short walk to and from the train station. Luckily I have plenty of time to rest on the trains. This train ride is where I started processing my photos and preparing my blog posts. As I write and edit this, I’m preparing my next set of blog posts on a train on its way to Lucerne, so I think this will become a pattern for me. END_OF_DOCUMENT_TOKEN_TO_BE_REPLACED

Slept in quite late, I think I slept 10-11 hours, feeling a bit groggy, but probably over my jet-lag. Feeling a bit sad about time lost to sleeping that could have been working on my Ludum Dare submission (or touristing), but recovering from jet lag is important.

Spent the morning programming, and then went out to find some lunch. I sat down at an outside seat at a nice little pub, which was completely empty, that had reasonably priced sandwiches, placed my order, and then it started raining hard and gusting wind, so I moved inside, as did a bunch of other passerbys and in moments it was a pretty popular place. END_OF_DOCUMENT_TOKEN_TO_BE_REPLACED

I woke up a little before 3AM, wide awake, checked my calendar, and saw that one of the 3 times to do round 1 of the Google Code Jam was in fact 3AM today, so I signed on, did that (advanced to Round 2, which will be in a few weeks), and chatted with Bart (the author of the current Code Jam platform, now, finally, eligible to compete since he left Google a while back) about the problems, and tried to get back to sleep, but ended up thinking about possibilities for the Ludum Dare (which also started around the same time). The theme for the 35th Ludum Dare was “Shapeshift”, which was not particularly appealing to me, but working within restrictions is part of the Ludum Dare. For those unaware of what the Ludum Dare is, it’s a 48-hour solo game-making competition – all code, art, and sounds made from scratch, by a single person, during the 48 hours. This is my third Ludum Dare I’ve competed in, and they’re always a blast! This one will be balanced with a bit of sight-seeing in Geneva during the same two days though. END_OF_DOCUMENT_TOKEN_TO_BE_REPLACED

After flying to Seattle and before flying to Geneva, I took a long flight to Frankfurt on Condor Airlines. I’ve never heard of them before, but they were like half the price of any other airline going to anywhere in Switzerland when I wanted to. I think this is the best flight I’ve been on so far! I paid a little extra for “premium economy” which gives a bit of extra leg room, which was nice.  The seat between myself and the elderly bicyclers next to me was empty, also nice. The flight safety movie was pretty great, it included a dog, an Elvis impersonator, a mime, and what appeared to be a NASA astronaut, sitting on a Condor flight, wearing a space suit, quoting Neil Armstrong… in German. END_OF_DOCUMENT_TOKEN_TO_BE_REPLACED

As many of my friends now know, I’m preparing to wander around Europe for 2.5 months, attempting to balance my independent work (which I can do from anywhere) with sightseeing and visiting interesting places.

I have planned the first legs of my journey – I will be arriving in Europe on Tax Day, April 15th, landing in Geneva, Switzerland.  About 8 hours after I land, the Ludum Dare #36 kicks off, so I plan on competing in that while getting over my jet lag (or, since sleeping during regular hours is traditionally not part of any game jam, taking advantage of my jet lag…), while also spending a little time exploring Geneva.  After a couple days in Geneva, I’ll hop on a train or two and get to Zermatt, Switzerland, apparently the biggest and one of the best ski areas in Europe, which should give me some good spring skiing.

After that?  I’ll plan as I go, but probably my next stop will be Venice.  The relatively small city of Venice seems to have an overwhelming number of hotels to choose from with availability when I intend to arrive, I guess I’ll figure that out later =).