Why Barcelona? Some friends had stayed here a coupe months and recommended it and, well, it was the cheapest flight to Beijing, which is where I’m planning on going next, and seemed to have a good train connection from Marseille. Unfortunately, as I mentioned in the last post, that train was canceled due to a strike, so I hop on a plane instead. This plane is perhaps the most cramped plane I’ve ever been in, but at least there is an empty seat nearby so I don’t feel totally squished. My hotel room in Barcelona is similarly rather small, but I’m only there for two nights, so it’s no big deal.

Upon arriving in Barcelona, I’m suddenly struck with feeling like I’m back in California – people are talking at me in Spanish! That being said, unless it’s describing entrées on the menu of a Mexican restaurant, my Spanish is pretty poor, but at least I know all of the social niceties. I do notice, however, that the primary language on all of the signs is not Spanish at all, nor English, but Catalan. Barcelona is in the heart of Catalonia, a region of Spain that is pretty distinct culturally, historically, and linguistically from the rest of Spain. During the Franco dictatorship of Spain, they were repressed, it was illegal to even speak Catalan, but since then their culture has flourished.

For lunch I check the highest reviewed nearby spots on Google Maps and get directed to a Cuban restaurant. I am a little skeptical going in, as I’ve been to a Cuban restaurant in San Jose which people raved about, and I found it pretty mediocre, but it smells wonderful when I enter and the meal I have here is amazing. If you’re ever in Barcelona, stop by the Cuban restaurant a few blocks from the main (Sants) train station!

I have a tentative plan of following a “Tour Barcelona in 1 Day!” itinerary tomorrow, but since I have most of an afternoon today I figure I should go to a couple sites that are more out of the way. I start by going to La Sagrada Familia, a famous basilica of Barcelona which is still under construction (and has been for over a hundred years). It’s not being renovated, it’s still being built, with a lot of the original design attributed to Antoni Gaudi, famous surrealist architect.

The outside (which I have plenty of time to observe while waiting in line for tickets, and then waiting in line to use said ticket to enter) is stunning. Very surreal and lots of abstract statues which I quite like. The older facade on the back is much more Gothic, reflecting the time in which that portion was built. 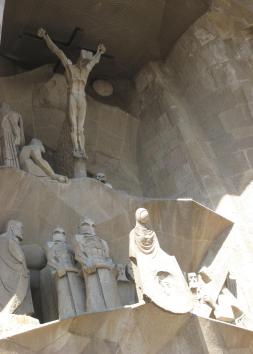 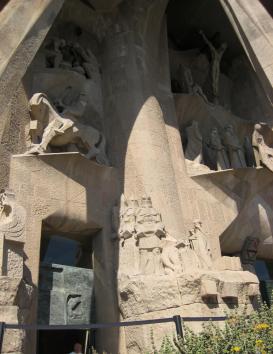 Inside, it’s all amazing colored light streaming in through stained glass windows and slightly organic tree-like pillars supporting the roof. 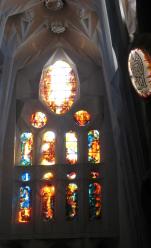 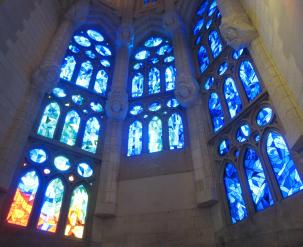 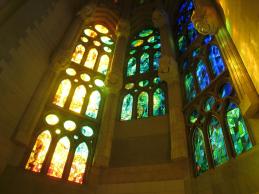 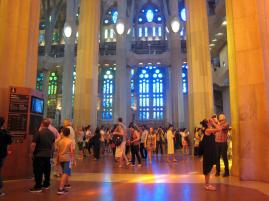 I take a short elevator ride to the top of one of the towers, hoping for some interesting views of the basilica, but see only construction work.  I do get some views of Barcelona, though it probably wasn’t worth ascending the tower for this. Descending, I spiral down way more stairs than I expected, considering how quickly I got to the top. In the middle of the spiral stairs I can look down a very, very long way to the bottom, usually seeing the tops of heads of other people looking down. 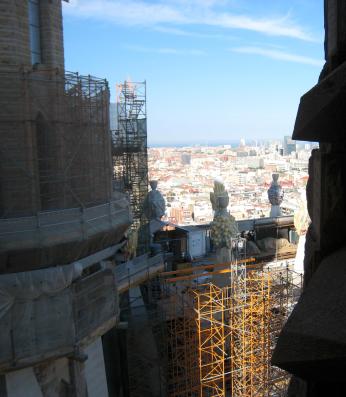 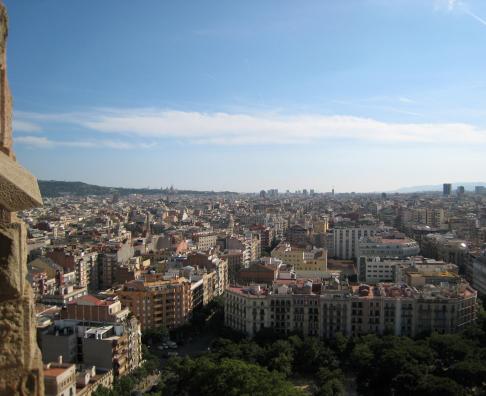 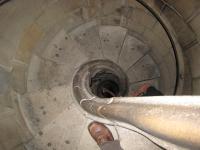 Next up: Park Guel. I actually have no idea what this is, but I had apparently starred it on Google Maps before my trip here, it does not appear on the itinerary for tomorrow, looks like a nice walk to get there, and is, presumably, a park, so I head there next. It turns out that “Park Guel” was a residential district commissioned by one Mr. Guel, designed by Antoni Gaudi. Fortunately for me, only a bunch of landscaping and a couple of buildings were completed, and it was eventually donated to the city of Barcelona and turned into a park! I wander around a bit, pay to enter to more interesting bit, and get some nice views of Barcelona through spires of Gaudi buildings. 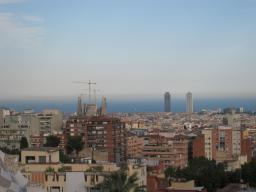 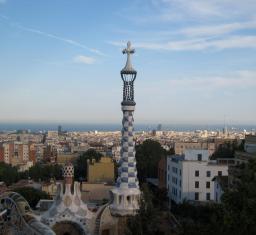 For dinner I head to a well reviewed local restaurant just a couple of blocks from my hotel, and on the way I see a sign advertising soda, with Mtn Dew at the center! I resolve to stop by there on my way back from dinner, and, upon doing so, discover that, in fact, they do not carry Mtn Dew. I guess some Cherry Dr Pepper will have to suffice for tomorrow. The next day’s breakfast in the hotel is pretty good, and rather American – eggs, bacon, potatoes. 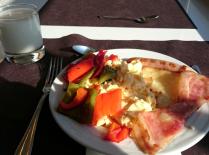 Before bed, I decide it would be nice to have some kind of audio guide/walking tour to give me some interesting history or facts about the places I’ll be seeing, so I do a search online for “free walking tours Barcelona” and find a company named “Free Walking Tours Barcelona” (and by “free”, of course, they mean “pay what you want” and “free from licenses and taxes”…), and sign up for one of their tours for the next day. Perhaps not as good as an audio tour I can play on my phone, but it’ll do!

The next day, I start by walking down a famous street which includes a number of buildings designed by Antoni Gaudi. They’re a bit spectacularly decorated, often shiny, and have all sorts of unnatural (for a building) waves and curves. This is where our word “gaudy” comes from. 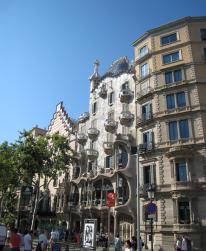 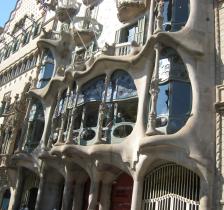 I arrive at Plazza Catalonia, where my tour is scheduled to begin, and after checking in, I hide from the hot day in the shade of a statue. The statue is, I think, of a naked woman, riding a horse, carrying a boat. Can’t you tell? It’s too warm, so I don’t bother leaving the shade to get a better look until our tour departs. 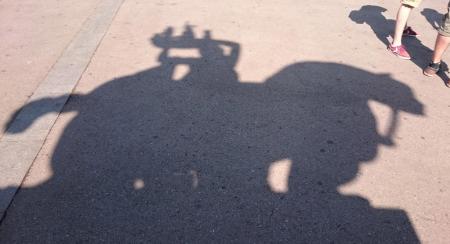 On this walking tour, I meet a couple who also use the same phrase I use when asked where they’re from – “most recently California”. It turns out they were most recently there over a year ago, doing the “wander around the world while working remotely” thing as well, though they’ve also got a kid in tow, which I can imagine complicates things! They found him day care today so they could do some exploring though. They have to leave immediately after the tour for the husband to call in to a “stand up” though.

The tour is of the “Gothic Quarter” of Barcelona, so includes a bit of Gothic architecture, and it first takes us to Santa Maria del Pi – Saint Mary of the Pine, which I come back later to explore inside. 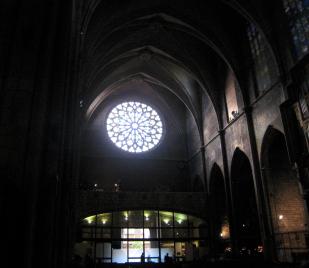 We travel through the heart of what was once the Jewish Quarter of town, see a church which still has damage showing from wartime bombing, and see a lot of Gothic arches. At one point I see, sitting all alone on the steps in the distance, an abandoned bottle of Mtn Dew. I do not know where it came from, but I now know it must be here, somewhere in the city…

One of our last stops is Santa Maria de la Mar (Saint Mary of the Sea), a church which was built by the rich merchant class of medieval Barcelona, near the port, which I come back later to explore inside. After the tour, a few of us sit down to have some lunch at a Catalan restaurant recommended by our tour guide. 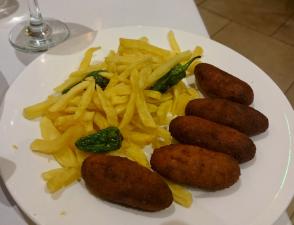 I also later return to a churroria (place that sells churros) which our tour guide pointed out, and get an order of churros with a chocolate dipping sauce. They were even more amazing than they sound. The chocolate was unsweetened, which goes very well with the sweet fried churros. 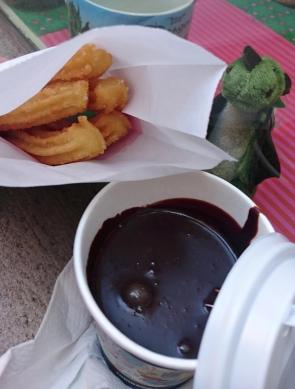 I get a short bit of time to stop in the Cathedral of Barcelona before it closes. It’s a quite impressive Gothic cathedral.

For a final stop, since I’m near the port, I head to the beach to get one of my last views of the Mediterranean, picking up an empinada for a snack along the way, and, finally, finding a place that sells Mtn Dew. Actually, it turns out that all of the supermercados seem to sell it, and there was one of those on the opposite side of the block as the store that let me down so thoroughly the night before. I should have walked around the other side of the block, I guess!

And, with my short stop in Barcelona finished, I’m off to Beijing!  This might be about my last traveling blog post for a while, as my stop in China is mostly social, and after that I shall be returning to the States, and not planning on doing much traveling at all until I finish Splody, which I had honestly thought I would have had much more time to work on ^_^.