In Venice I’ve felt like a tourist every day, due to the whole place being oriented towards tourists, but today my friend Daniel (also most recently from California) arrived in Venice, so, after a great calzone for lunch, we set out to see some of the more poplar sites which I had avoided until now. We start with the Basilica dei Santa Maria Gloriosa dei Frari church, which is just two blocks away from my hotel, and has a pretty good free audio tour through Rick Steves’ Audio Europe app. Lots of pictures are taken, apparently a bunch of work by famous sculptors and artists. I particularly like the lazy lion. The winged lion is a symbol of St Mark, the patron saint of Venice, so shows up everywhere, including the flag of Venice. 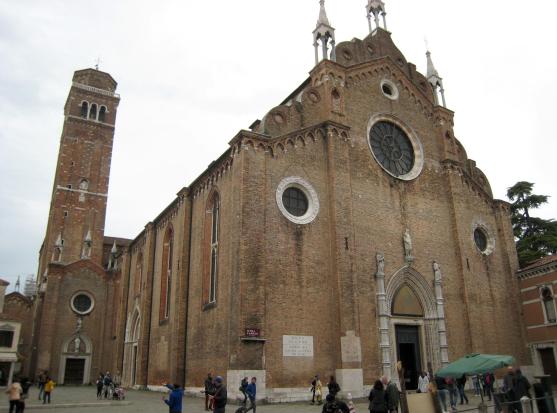 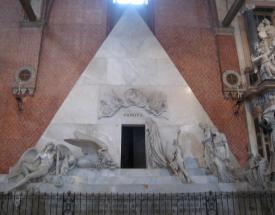 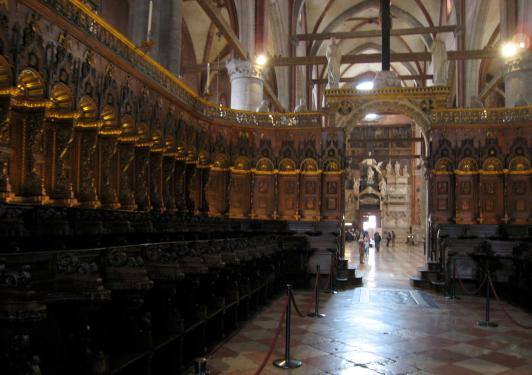 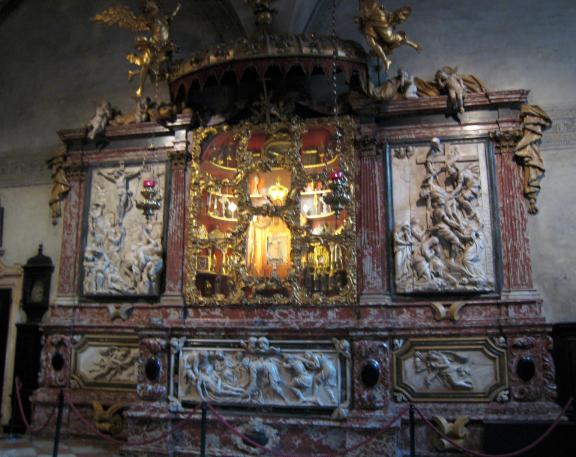 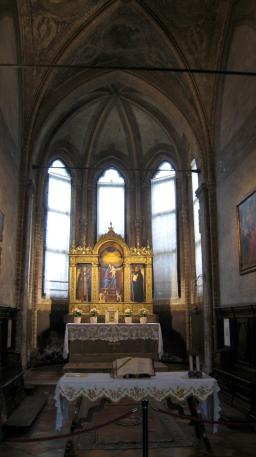 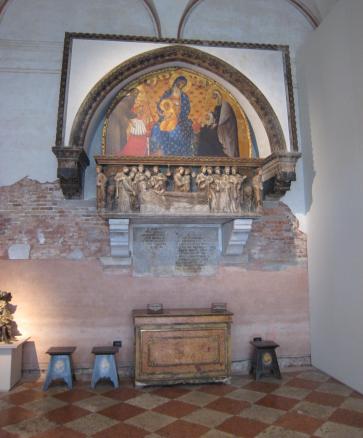 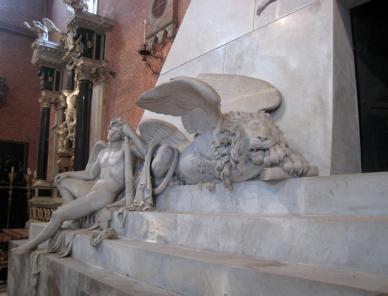 We spend a lot of time wandering around, Venice is a fantastic city to wander in – no cars, interesting views everywhere. At this point, I’m finally feeling comfortable wandering Venice without a map (or Google Maps) to get me back to my hotel. 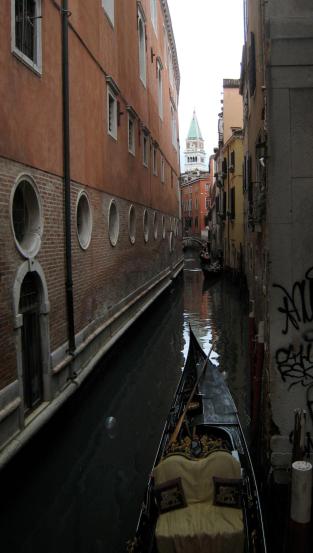 We next head to San Giorgio, the “floating church”, which is built on an island a little ways off from the main set of Venetian isles, and is right by the waterside so looks a bit like it is floating, as does everything on the edges of Venice. The ferry is a bit expensive for a 5 minute boat ride, but the location provides a slightly interesting church, and great views of the St. Mark’s Square area of Venice. 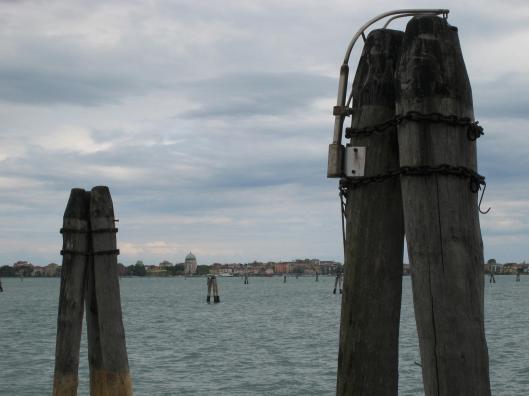 San Giorgio is nice, but not as spectacular as some of the other’s I’ve seen. It does have incredibly ornate choir chairs, of which photos do not do them justice. 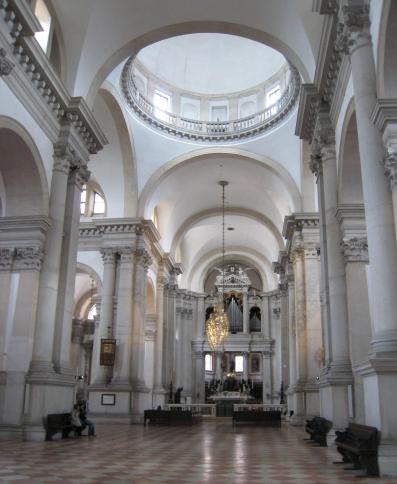 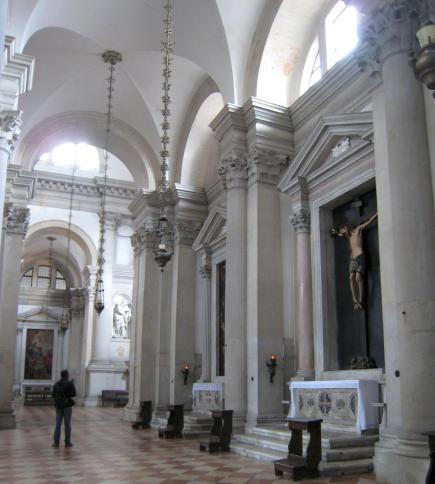 San Giorgio is in the Castello district, so I figure there must be a castle around. There is, but it is an active military installation so we are not allowed in, but get some crenelated pictures, before wandering around a part of Venice I have not yet seen. Apparently it is off the beaten path enough that a local came up to us and asked us “Are you lost?”. If I’m lost, it’s only because I want to be! 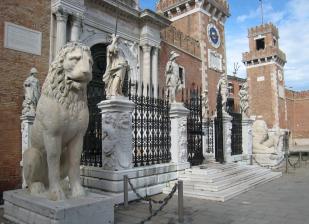 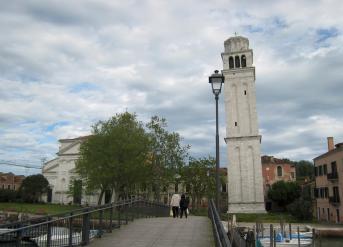 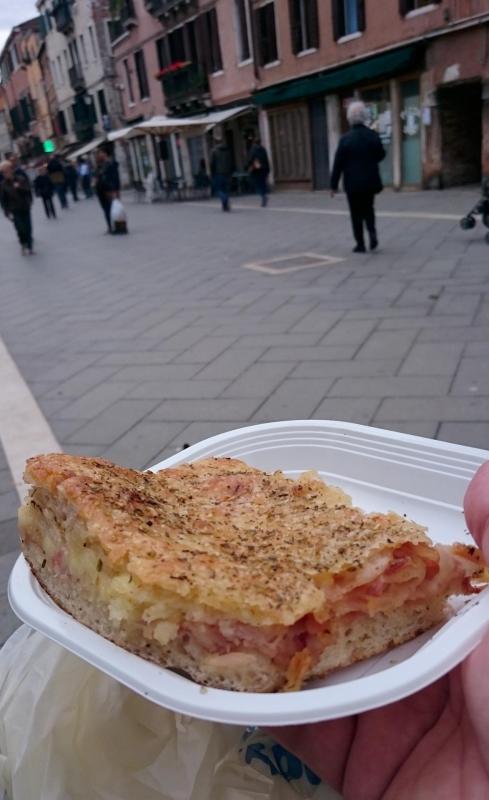 We wander back out that evening, to listen to music and see St Mark’s Square at night. Daniel’s camera and tripod does night pictures way, way better than mine, so a couple of the juicier shots here are his.

The next day I do some work in the morning as Daniel is out seeing some sights I have already seen. I mostly work on preparing assets for Steam for Splody, and get to the point where I can see a preview of Splody in the Steam Store (under a “test” flag, not public yet), and that is very satisfying. It feels great to see Splody in Steam! Unfortunately, I won’t get much time to work on Splody (or update my blog!) until I reach Rome in a couple weeks, as the time between now that and then is packed full of being a tourist with friends, but I think that’s a fair priority for now =).

In the afternoon we meet at the Bell Tower in St Mark’s Square. The square is full of pigeons and people, it is often difficult to distinguish flocks of one from the other. We ascend the tower, have a fantastic view of Venice, and then briefly discuss applications of game theory and traffic flow as we wait in line for an elevator for a half hour in a very crowded tower top where time would be much better spent enjoying the views if only everyone wasn’t lined up for the elevator… 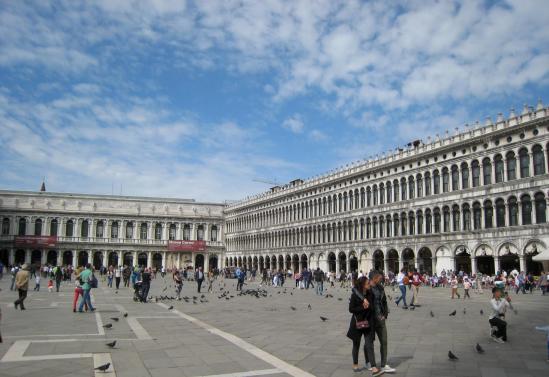 From the bell tower we identify the largest structure in Venice, the church of Sans Giovani e Paolo, which I had not yet been to, so we make our way over there, but from the entryway it looks like a less awesome version of Frari, without a handy audio tour, and with an entrance fee we didn’t feel like paying for, so you guys only get to see a picture of the outside. While out and about that afternoon, Daniel picks up a flyer for a free concert, which happens to be just a couple churches away from our hotel, so we go there. It is an a capella concert by a group from Jacksonville, FL, and is really good. I enjoy this much more than the Vivaldi concert of nights past, though that may just be because I have a soft spot for a capella music.

The next morning we head over to the Basilica di San Marco before it opens (we thought the lines were too long when we passed by the day before), however even that early the lines are still long. As we wait in line, we listen to the intro to the Rick Steves’ Audio Europe tour, which is quite good, and, right about as we make it to the front of the line, it tells us how we could have avoided the line entirely ^_^. No pictures are allowed inside, which is probably for the best because it was crowded enough with us gawking at the magnificent art and walls and paintings and relics, without anyone stopping for pictures. Inside is gorgeous, and some of the art is more than 2000 years old; lots of things there, including the body of St Mark entombed there, was plundered in the past, sometimes multiple times back and forth. The art style of the place is sometimes called “early ransack”, because the styles of the place vary greatly with influences of lots of foreign styles. There is a treasury room full of a display of various priceless artifacts, and a lot of religious relics – many bones and body parts of saints – and a stone slab of a pillar which is believed (with reasonably credible evidence) to be the one upon which Jesus was scourged. The bones of one who slew a dragon, Saint George, are less credible. However, the packed crowd of conversing people make was could be a very spiritual set of relics into just an art display, which is a little disappointing, but I enjoy the tour of the basilica nonetheless.

Tomorrow, Verona, and then off to Turkey where I’m meeting a friend for a whirlwind of touristing, so I might not post many updates until things settle down again in a couple weeks, when I return to Italy.  (Footnote on 2016-05-09: As I finally get around to uploading this, which was delayed due to poor WiFi and busy, busy days, it’s incredibly unlikely I’ll post anything until I return to Italy, having a great time in Turkey, despite no Mtn Dew for weeks).

One thought on “Tourist in Venice”