Thursday through Sunday update. Quite a few quiet days. I’ve been enjoying doing a little bit of sight seeing (usually just as I seek out an interesting place for lunch) each day, and spending some time working, and a lot of relaxing before my upcoming whirl of activity. I have had very poor luck finding any kind of cafe in which to get work done – all of the ones with good views along the canals are expensive, and all outdoor seating, so quickly get either too hot or too cold depending on the whims of the Venetian weather (it’s been almost 80 one day and cool rain the next), and most of the others have rather uncomfortable seating, so I have resigned myself to my hotel room for doing work in Venice. I’m definitely going to book a desk in a “coworking space” when I roam over to Rome in a few weeks.

A couple times I grab food from the “snack bars” around Venice – they’re bars that serve little dishes, often like appetizers, but often like small meals. There’s a “snack bar crawl” tradition of grabbing a little to each at each of a bunch of bars. They make for a tasty meal or snack.

Near the art museum is the Santa Maria della Salute church which I had seen from a distance before, and I spend a little time exploring that. It is a giant domed structure, with lots of little knaves on each side with paintings, sculptures, and relics. 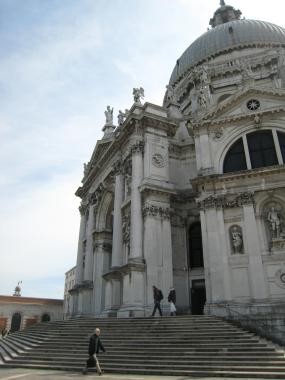 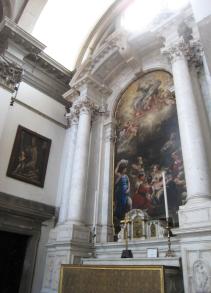 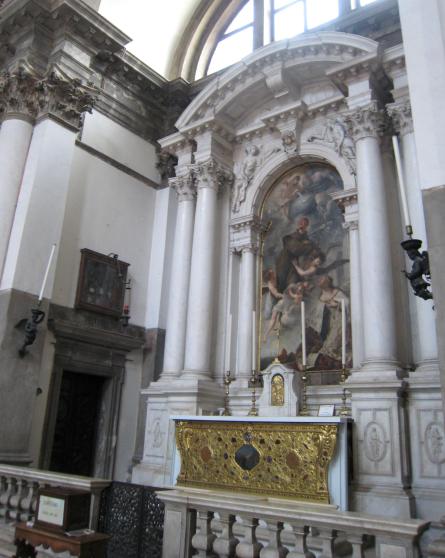 Friday night I attend an evening mass at St. Mark’s Basilica. They celebrate around 5 masses every day, but just this one is after the place is closed to tours/tourists. I enter through a back entrance, telling the bouncer/security guy I’m here for mass, follow a little old lady into a beautiful back area of the basilica, and mostly passively (since it was all in Italian) attend mass with just a dozen other people in this gorgeous, spiritual place. No pictures on that visit, but I’m sure to get a bunch when I return here as a tourist on Monday or Tuesday.

More wanderings another day, and I see the local vehicle repair shop, and a very, very small shoe shop, with just enough room for the proprietor to sit in it. I also consume my worst meal so far – a calzone which looked pretty good in the window until the man in the shop destroyed it by putting it into a microwave to re-heat it. At least I was able to pleasantly munch on it on my balcony.

In another food outing, I search Google for “best meatballs in Venice” and it has a side-bar for a particular restaurant so I head there. The meatballs are only “good” in my book not quite the kind I was looking for. These were fairly dry but encrusted in some delicious, flavorful breading. I was hoping for juicy meatballs drowning in melted cheese. The “seasonal vegetables” were fantastic though, wonderfully seasoned. After lunch I make the horrible mistake of stopping by “Frito-INN”, a little shop that just sells fried things, and ask for the “fried mozzarella with ham”, which ends up being like a medium sized sandwich, but the slices of bread are replaced with giant slabs of mozzarella, and then fried. The first two bites were wonderful, and I regret the rest of it (didn’t actually manage to eat all of it).

That evening I decide to start my pizza sampling quest, and start with a slice of “pizza alta” (“tall pizza”), since I like a thicker pizza, but it was just a very thick bread with the standard very thin layer of cheese and toppings, and was not fantastic. The next day I sample two other pizza vendors, the last being an actually rather thick slice of pizza with lots of layers of ham and cheese, was definitely the best, even if the only part of the picture that turned out well was the pigeon in the background. 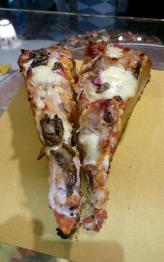 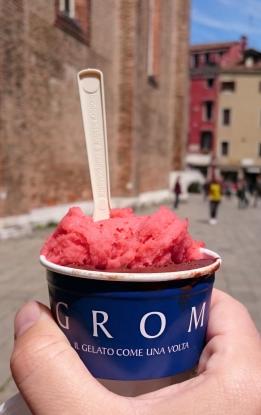 Sunday morning I head over to San Zulian where the internet incorrectly tells me there is a mass in English at 9:30, but alas it is at 10:30, so I spend a while exploring and visiting the other nearby churches before coming back. Though the mass was in English, I’m pretty certain the Italian priest is still using the English text of the older mass (not the “new Roman mass” translation of the recent decade), but all of the tourists in attendance (I’m pretty sure all 15 or so people in attendance were travelers like myself) were responding with the new responses, so it felt a little inverted of when we first switched to this mass translation a while back (where the priest was using the slightly different new translation and as the congregation we were often saying the old responses out of habit). It’s possible that Italian is one of the only languages that did not get any adjustments done to its translation a few years back, so perhaps he has no idea there’s a new official translation in English he should be using… or perhaps he just likes being old fashioned, which I can relate to. I have a bit of a Sunday Brunch as I wander home after mass, trying a couple baked goods which were phenomenal. I spend the rest of the day doing my laundry, doing some work, and chatting with my friend whom I will be meeting up with soon in Istanbul.