A day trip to Orvieto! Orvieto is a small “hill town” north of Rome an hour or so by high speed train. Called a “hill town” because the town is built atop a hill, a bit like the acropolises in ancient Greek and Roman times. This one dates back a couple millennia, but was abandoned for a few hundred years after the Romans defeated the native Etruscan people.

It’s a quaint little town with winding, slightly hilly streets, all with a lot of charm. There are a lot of cars considering how tiny the roads are – I expected almost no automobiles, it seems like a perfect pedestrian-only little city, but cars zoom by through one-way alleys. For lunch I decide to try a kind of “pizza” I’ve been seeing for a while – it has meat and… French fries… on it. And no red sauce. I’m not sure it can actually be called a “pizza”. The taste is, well, about what you’d expect. The cat who joins me as I sit on a bench seems to like it more than I do. 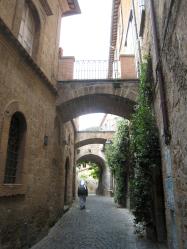 I make my way over to the Duomo di Orvieto – the Orvieto Cathedral, the main attraction in town due to its very fanciful facade. 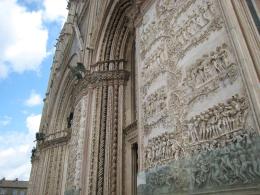 The inside is also, of course, rather ornate. The place is built from two different kinds of stone giving it its striped appearance. Lots of frescoes in some chapels, as well as a famous chapel containing a reliquary within which lies a cloth believed to be stained with the blood of Jesus. 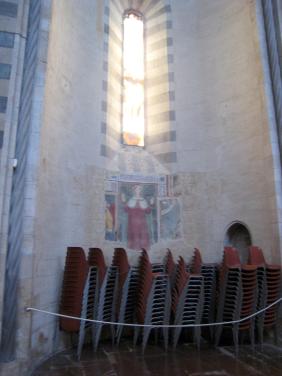 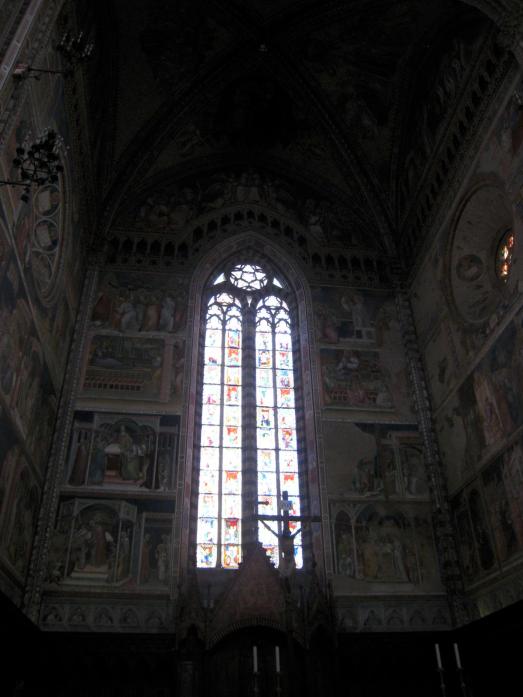 As I’m walking around, I follow a map which outlines a path that walks past most of the churches in Orvieto, and I enjoy spending a little while reflecting or praying in each. While I’m doing this, a storm rolls in. I am sitting in silence inside a massive, but completely empty, save myself and the flickering light of a few candles, church, when the echoes of thunder start reverberating through the place. It is wonderful and awesome. I continue my wandering, now with a bit of protection provided by my rain coat, but not enough as the wind and rain pick up quite a bit and drench my hat and pants. I make it to the edge of the city-on-a-hill, and get to enjoy watching the rain pour down on the countryside below.

During the worst of the storm, I duck into another church, but this one is either A) a much more famous church or B) the nearest public building when the storm hit for the 3 classes of elementary school children who were also taking refuge there. I suspect B. It’s much less peaceful than my last stopover. I make a brief stop at the Well of the Cave, a private archaeological tourist site where you can walk down through some caves to a very large well, and wander some other old man-made caves.

Speaking of caves, they’re all over the place under Orvieto. I think they have cataloged about 1200 caves. The caves are almost all private, connected to the basements of buildings, and used even today as wine cellars and such. The kind of rock Orvieto is on is very soft, formed from volcanic ash, and can be carved with simple metal instruments, so caves have been created and expanded since they were first dug by the Etruscan people. The Etruscans were apparently very short and stout people, and liked digging caves. That word is hard to spell, so I’m just going to call them “dwarves” from here on…

I meet up with a group to take a tour of some of these caves, but on the way we get wonderful view of a castle down below. And a cat. I am forced to title that picture CATstle. 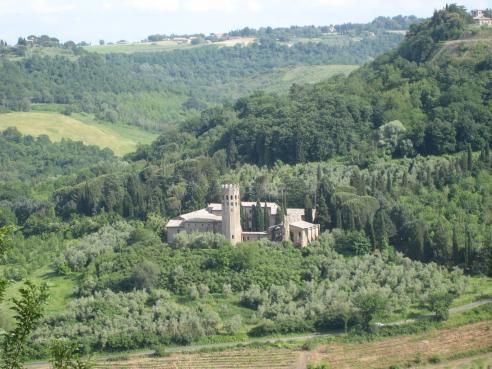 The caves are pretty interesting. In more recent times (e.g. when Italians were living in Orvieto in the past 1700 years or so), the caves have been used for all sorts of industry, we see olive presses, wine cellars, and numerous pigeon coops. For a city, on a hill, under siege, with a good water supply, homing pigeons were the perfect livestock – they would fly out during the day to scavenge food from the countryside, and return to their coops at night, providing a convenient food source for the people or Orvieto. Some restaurants still serve local dishes made of pigeon, though I did not get a chance to sample any. The caves were also used to quarry the soft stone which could be used in making cement, though people are no longer allowed to expand or dig under the city, due to fears of instability. In fact, we see many places where the walls or pillars of the caves have been recently reinforced with much sturdier stone to prevent buildings above from sinking in. We see a well mined by the dwarves, passing through the floor and ceiling of one of the rooms. It was 80 meters deep (have to get down deep to the more solid clay below to find water), very precisely made (perfectly vertical) and they estimated the dwarves would dig at a rate of about a meter per day. The well includes a ladder, and someone would stay in the bottom of the well, filling buckets and sending them back up on pulleys. 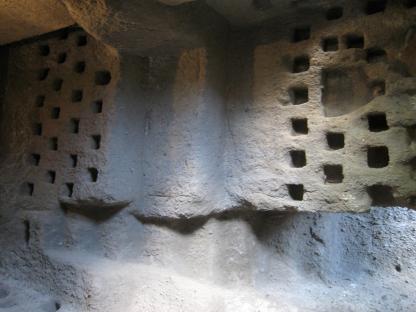 After my glimpses of beautiful views looking down from the city, I decide to walk part of the hiking trail which lies beneath the walls (though still mostly up on the hill) and travels around the city. The views are gorgeous, and it makes it clear how defensible this town was due to its location and walls. I end the hike by climbing back into the city, on top of one of the walls, and looking down at the trail I had just traversed. 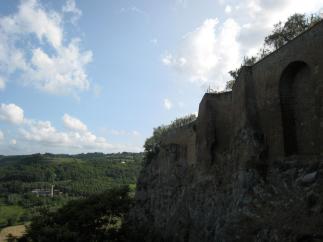 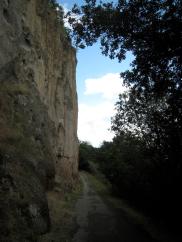 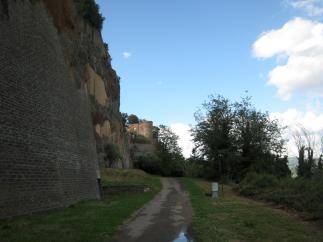 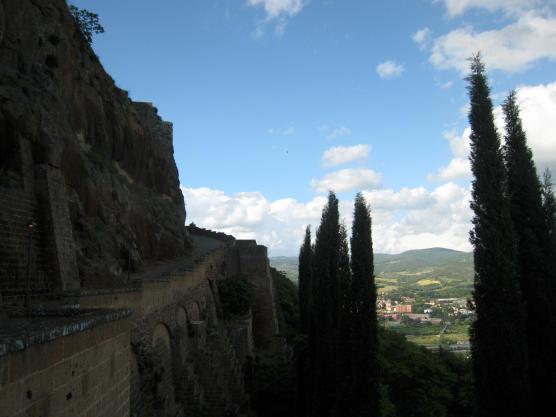 I try to find some dinner, but being that it’s “only 7pm”, none of the darn restaurants are open for dinner yet, so I decide to see one more significant site before catching my train back to Rome. I visit the Well of St Patrick. This well is an engineering marvel for the time – it is enormously deep, very large, and incredibly constructed. It’s made with two disjoint spiral staircases, described in poetry as entwined serpents, so traffic (mostly animals going down to drink and bring back up jugs of water) could go down one way, cross the well at the bottom and enter the mouth of the other serpent to ascend back up the other stairway. I pick up a nice audio tour that gives me lots of interesting history, as well as a great excuse to sit and catch my breath after the long climb back up and relax in the cool temperature of the well as I listen to the remaining bits of the tour. The well is constructed similar to a tower (and it is larger than its contemporary tower in Pisa), but was built from the top down, as they dug the well. 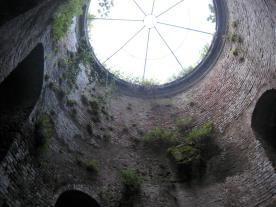 When I arrived in Orvieto, I was worried that I had about 7 hours until my return train ticket, and on my last day trip (to Verona) I was ready to return in much less time than that. But in Orvieto the time passed by quite nicely, perhaps because I was wandering at a relaxed, leisurely pace, and taking in the little sights, not just the major ones, and I was glad to have had as much time as I did! Next up, a day to work and relax in Rome before another day trip, this one to Florence, the birthplace of the renaissance.