We next make our way (via Uber, a flight, and a bus) to Cappadocia, a very large ancient settlement which was built into the mountains of the area, due to its rather brittle stone which could be easy carved away to make rooms within the stone. This made for rather defensible settlements, with doors hidden away, and no visible way in to most homes. Animals could be kept in farms made entirely underground. This was also a very active and significant Christian community in the early centuries of Christianity. The ability to defend the area led to it being great for hiding from invading marauders in earlier days and from religious persecution by the Romans in latter days.

“Aren’t all these who are speaking Galileans? Then how is it that each of us hears them in our native language? … Judea and Cappadocia, … visitors from Rome … we hear them declaring the wonders of God in our own tongues!”
– Acts of the Apostles, Chapter 2, Verses 7 – 11

Peter, an apostle of Jesus Christ, to God’s elect, exiles scattered throughout the provinces of Pontus, Galatia, Cappadocia, Asia and Bithynia, … Grace and peace be yours in abundance.
– First Epistle of Peter, Chapter 1, Verses 1-2

My hotel, in traditional Cappadocia style, is carved out of solid stone as well. It is absolutely enchanting inside the suites, with a couple walls built of regular stone and mortar, but the bedrooms on the lower floor and the bathroom are clearly carved directly from the stone. The bathroom is spacious and amazing. The only downside to this soft stone is any time I go down the stairs to the lower level and I brush my hand on the wall for support, bits of stone come loose, and soon I need to wear slippers to go up and down the stairs lest I step on prickly little bits of stone.

Stepping outside our hotel, we see, jutting up between modern buildings, the ruins of an ancient bit of the city – I deduce that a lot of the large visible openings are actually interior rooms, as parts of the stone side of the mountain have fallen off over time, exposing what were once internal rooms. We walk to the Goreme Open Air Museum, at which we can travel through a densely packed part of an old settlement. This settlement seems to have roughly one church for every 5 homes. The churches are all very small – maybe room for 10 people inside, and we are not allowed to take photographs inside. From what remains, we can see the churches were decorated in a variety of styles, though all were made by carving into the stone. It seemed very popular to paint onto the stone to make it look like was made of other materials – for instance where they carved an arch, they would paint it to look like the arch was made in the Roman style of blocks of stone and a keystone. Many of the churches contain visible skeletons (behind glass), presumably of those unearthed during the excavation of said churches. The place is really neat, though one empty cave home starts to look exactly like the next after touring a few. 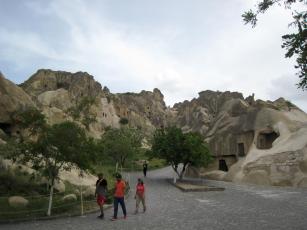 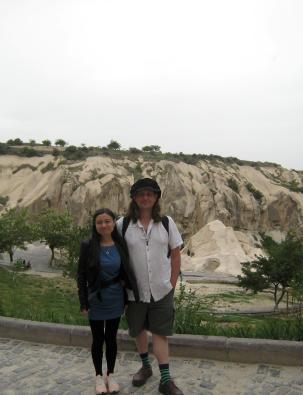 After the hectic hurry of our tour group, we have some pretty lazy, relaxed days, which leads to us missing our opportunity to tour the “underground cities,” which sounded pretty cool – up to 8 floors deep carved down under the ground. We go on a hike in a random direction one evening (different direction than we went to see the “Open Air Museum”), and, after walking past many people riding on ATVs, see some nice views of what I think are the “fairy chimney” rock formations found in this area, as well as many more holes in the stone that are evidence of the previous residences here. 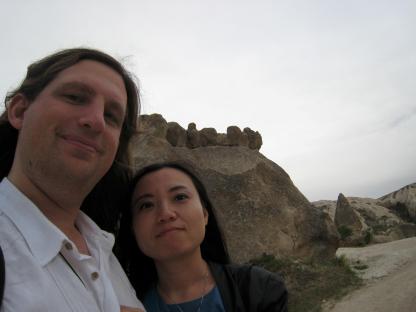 This is another place in Turkey I might want to visit again some day – seeing the underground cities would be cool, and it’s a very popular place for hot air balloon rides with gorgeous views, which we were unable to partake in because of the weather while we were there (they get canceled if there’s any wind). But for now… off to see the Black Sea!